Book One in the Rachel Knight Series

Brilliant and tenacious, DA Rachel Knight lives and breathes her work and disdains office politics—a combustible combination that often gets her into trouble. She is a stalwart member of the elite Special Trials Unit, a small group of handpicked prosecutors that handles the toughest, most sensitive, and most celebrated cases in the Los Angeles District Attorney's Office. At the end of a typical ten-hour day, Rachel has her sights set on an ice-cold martini at the Biltmore Hotel, where she lives. But on her way she's sidetracked by the wail of sirens and the commotion of a crime scene. Cops swarm around a seedy motel, where Rachel is surprised to discover that Jake, a dear friend and fellow prosecutor, has been murdered.

The suspicious and potentially explosive circumstances of Jake's death are never far from Rachel's thoughts as she takes on her fallen colleague's most politically charged case: the mysterious assault on a young woman from an influential L.A. family. Rachel enlists the help of her best friends and partners in crimefighting—Toni, a fellow Special Trials prosecutor, and Bailey, a tough-as-nails LAPD detective—to covertly undertake her own investigation into Jake's murder. Rachel's drive to clear Jake's name exposes a world of power and violence that will have her risking her reputation—and her life—to find the truth.

"A triumphant fiction debut that catapults her to the same level as Linda Fairstein, her fellow assistant DA turned legal thriller novelist...Clark deftly handles the multiple plotlines...Readers will want to see a lot more of Knight, who combines strength of character and compassion with all-too-human foibles."
—Publishers Weekly, STARRED review

"Clark, lead prosecutor in the O. J. Simpson trial, pairs her knowledge of the L.A. judicial scene with a surprising flair for fiction in a remarkably accomplished debut novel....Clark offers a real page-turner here, with smart, fast-moving prose; a skillfully constructed plot; and a protagonist well worth knowing. Rachel, whose past is only hinted at, is a well-rounded character who's as tough with suspects as she is sensitive with young victims. A top-notch legal thriller that will leave readers wanting more...a genuinely high-quality novel."
—Booklist, STARRED review

"A corker of a debut novel in which a brainy, plucky female prosecutor refuses to rush to judgment... That the novel is marked by authenticity is no surprise given Clark's credentials—she was, after all, lead prosecutor in the headline-grabbing O.J. Simpson trial—but what may surprise some readers is the quality of the writing, plus the considerable charm of Rachel and her buddies."
—Kirkus Reviews, STARRED review 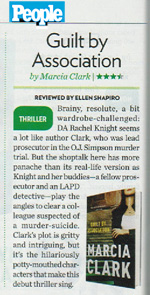 "Marcia Clark's debut novel showcases her experience and knowledge of the legal system. The pace, plot and dialogue are as sharp as they come in the genre. Her character of Rachel Knight bleeds real blood, sweat and tears on the page. Guilt is a four-bagger for Clark and her many new fans will eagerly await her next step up to the plate."
—David Baldacci

"You must read this book: it is wildly and complexly plotted, ebulliently witty and filled with riotous humor; it details the inner workings of the L.A. legal system with unprecedented accuracy and verve—and to top it off, it is a damn, damn, good thriller."
—James Ellroy

"A startlingly good first crime novel by (name sound familiar?) the prosecutor in the O. J. Simpson murder case. The heroine, an L.A. prosecutor, is likable, smart and witty, and she knows every level of Los Angeles as maybe only someone who has lived Clark's life could. None of that explains why she can write, but that's to be celebrated—fluid line for line, vividly imagined and scary, with an intricately constructed, irresistible flow. And sequels likely."
—Claire Ernsberger, Book Review Columnist, Sullivan County Democrat

"Never one to disappoint, the Los Angeles trial lawyer has written a remarkably dark drama of murder with an edge-of-your-seat plot that circles around the rich who live behind protected estates, unwittingly becoming tempting targets for violent rapists."
—Curled Up with a Good Book (4.5 stars!)

"It's a cast of tough cookie, wise-talking, believable and, more importantly, very likeable, characters which I'm sure will appeal to both male and female readers. I would love to share pretzels and a martini with these ladies. A great first novel and, no doubt, the beginning of a long and successful series. Go get it!"
—BOOKS AND WRITERS (read the full review)

"Guilt By Association is a smart and captivating mystery with more than a little of the page turner about it. Clark has charming cast with Rachel and crew, and I look forward to their further exploits."
—LinussBlanket.com (read the full review)

"I highly recommend this book. It has a strong plot, a good flow, and is written well. Ms. Clark says it took her a while to get the story right, but she sure did."
—BkFaerie.blogspot.com (read the full review)

"A fast, diverting read that shouldn't make readers feel guilty for picking it up."
—PopCultureNerd.com (read the full review)

"Marcia Clark has a winner with this one as far as I'm concerned. I enjoyed the writing style, the characters and the story. I'm definitely looking forward to more of Rachel Knight and her friends and highly recommend this one to folks who enjoy crime fiction."
—Whimpulsive.net (read the full review)

"Rachel is so smart, canny, tenacious, tough (without being rough or crude) and loyal. She's such a good character that I'm very hopeful the author has a couple more Rachel Knight books in her laptop. I'd love to read more."
—JoyfullyRetired.com (read the full review)

"It's a terrific read that's guaranteed to keep you entertained from the first page to the last."
—Bookingmama.net (read the full review)

"Reading Guilt by Association is like taking a ride down the virtually mythical Mulholland Drive in a new Tesla roadster."
—JosephsReviews.wordpress.com (read the full review)

"Right from the opening, you just can't help thinking as you read, 'Wow, this woman REALLY knows what she's writing about!'"
—FrozenYogurt.com (read the full review)

"Clark's use of dry humor, compassion, and strategic problem-solving by [her] characters is deft and entertaining. And Clark's emphasis on the strength of the friendship in the women, and the support they provide one another in work and in play—dinners, drinks, romance—are evocative of some of the best of the trail-blazing women crime fiction writers: Sara Paretsky, Marcia Muller, and Linda Barnes, to name just three. But make no mistake: Clark makes Los Angeles' legal jungle her own territory. She knows her city and its Hills and Valleys, its political fundraisers and the accompanying underbelly. And she moves Rachel Knight through the twists and turns of the freeways, canyons and plots with a deft hand. Mulholland Books and Marcia Clark have promised more to come—and we'll be looking forward to it."
—CuriosityBuilds.com (read the full review)